This article is just a quick run-down of the Top Twelve Lies.

1.   People dropping dead in the streets. 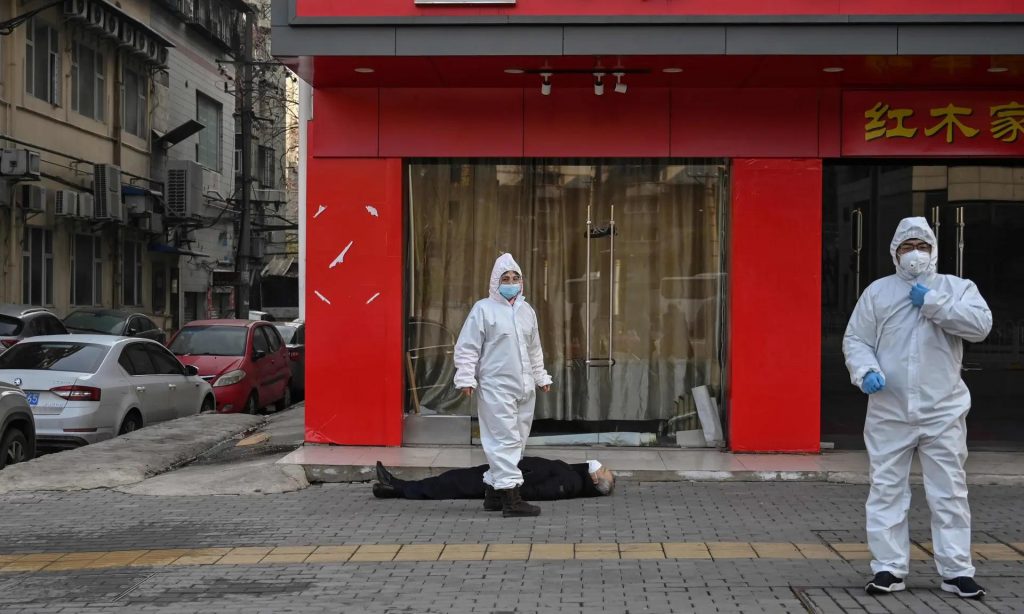 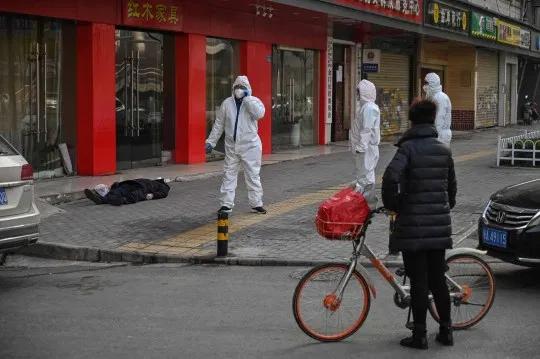 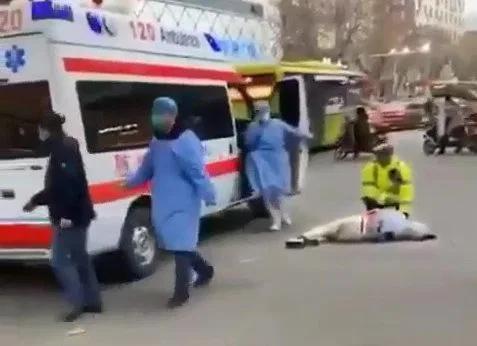 This is how the media portrayed COVID-19 at the beginning: a disease so dangerous that people walking along the street suddenly dropped down dead. Virtually all the UK media carried these photos. It’s very odd that in the first two pictures, and variants of them in other papers, those emergency workers have no equipment with them, and appear to be just standing around doing nothing. Are these faked photos? There have been no reports of people dropping dead in the street anywhere since then. And if it had been true in China, the virus would have been noticed very quickly. We now know that the symptoms are indistinguishable from colds, flu or pneumonia. These photos were the start of the Coronapanic lies.

The WHO put out this 3% death rate figure early on. You don’t need to be a maths wizard to know that’s one person in thirty. That’s a serious reason to panic. We now know that the death rate is around 0.1%. That’s about one in a thousand, and comparable to seasonal flu. But just as important, the figures are massively skewed towards people around eighty who have at least two existing serious conditions, and are already in a care home: people who have minimal quality of life, and little remaining expectation of life. For younger, healthy people, and younger here can mean under seventy, never mind twenty or thirty, the risk of death is vanishingly small.

3,    Herd Immunity is a Dangerous Idea.

This is one of the most serious corruptions of science ever. You don’t need a degree in Epidemiology to know that epidemics come and go. The very definition of the word implies that. (Conversely, a disease which stays around for many years is called endemic.) You do need to know just a smidgen of Epidemiology to understand why epidemics come and go. It’s not rocket science. When the new disease arrives, everybody is susceptible to it, because it is new and therefore nobody has any immunity. The disease can race through the population, but as it does so it leaves immune people in its wake. As the number of immune people grows, the disease finds it harder and harder to spread. When the number of immune people reaches a certain point (which varies with different diseases) the bug can find no new people to infect, so the bug itself effectively dies. That point is called herd immunity. It is the only way to defeat a new virus. But see number 4.

4.   We Need a Vaccine to Give us Herd Immunity.

Vaccines work by creating artificial herd immunity, but that’s no better than natural herd immunity. And the simple fact is, as everyone knows, we don’t have a vaccine. How long will it take to make one, test it properly, and roll it out? Eighteen months? Three years? Never? In any event, even if we use a vaccine before proper safety testing, it will still take longer than it does to reach herd immunity naturally. (And note that the Common Cold is also often caused by some other Coronaviruses. Still no sign of a vaccine for any of those.)

The evidence here is very, very weak. It is common sense that they must have some effect. But we have New York, with a hard lockdown and massive deaths, while Tokyo with a minimal lockdown has hardly any. Or Sweden with a very mild lockdown having a lower death rate than Britain with a draconian one. Or Spain and Portugal, which together make up the Iberian Peninsula, having massively different death rates. There is another factor, or factors, involved here, and the mass media seem to have no concern as to what they might be. Happily there are some scientists who do seek to explain the differences. Several factors have been put forward with good evidence:

One could tease out many other factors, but not one comes close to the Grand Deal-Breaker in Epidemiology, which is immunity. Immunity is the principal reason people do not get sick with any disease. Hence the primary factor in differential death rates must be how long different countries had the virus before they realised. As the infection travelled through populations, confused with colds and flu, it was steadily building immunity. China has a truly miniscule number of deaths given its huge population. The virus there was on the rampage right through Winter Flu Season, before they realised there was something new. When they did, they locked down, and the lockdown appeared to be very effective; but only because they were already close to herd immunity. The countries surrounding China, which have a great deal of intercourse with it, have similarly low death rates (Vietnam, nobody at all!) How and when the virus got into other countries is difficult to unravel now; but one should be aware that Wuhan Airport is a major hub, with flights all over the World. We can reasonably infer that Norway, for example, was infected early, yielding the much lower recorded deaths later. Such a conclusion is borne out by the fact that, having now eased its lockdown, cases are still going down. In other words, there is no sign of a “Second Wave”. After a tight and effective lockdown preventing transmission, and also therefore preventing the growth of immunity, there should indeed be a second wave. The lack of one points very strongly to previously acquired immunity. (In all of this New York remains the ultimate outlier, and I’m no more prepared to attempt a complete explanation of NY statistics at this stage than anybody else.)

6.   Lockdown Does Not Cause More Deaths than it Saves.

The leaked figure of 150,000 lockdown-caused deaths has never been refuted by the UK Government. It is only common sense that with the NHS shut down to almost everyone, there will be more deaths from other causes. Also more suicides, more domestic violence, and the array of problems that increase mortality when poverty increases. The economic crash is going to have a big effect there. And do we regard the suicide of a healthy 20-year-old as equivalent to the death of an ailing 85-year old? Lockdown is not a One-Way Street when it comes to saving lives; more likely a Wrong-Way Street.

This is a truly bizarre assumption to make about any specific infection. (Note that the Common Cold, which is endemic, is caused by a number of different viruses.) This “fact” was allegedly based on some people who seemed to be infected twice. But the extreme difficulty of distinguishing between Colds, Flu, Covid19 and Pneumonia means this was always a ridiculous conclusion to reach. And if it were true it would be a one shot kill of the “Race for a Vaccine.” Vaccines only work because they stimulate the immune system in the way a natural infection does. If Covid19 did not provoke a normal immune response, any vaccine would be useless.

8.    Having Covid Means Having Serious Symptoms.

In the beginning of this sorry saga, the most serious symptom, as noted in Lie 1 above, was instant death. Now we know that it mostly has no symptoms at all, or presents like a Common Cold. All the World’s highly-paid and endlessly-promoted “experts” somehow didn’t notice this.

If they do, why can’t we all wear them and get back to normal? If they don’t, why are we ever recommended to use them? The effectiveness or otherwise of masks has been a controversial matter for months. Some Doctors have said that healthy people wearing them outside of a clinical setting is definitely a bad idea. Is the mask controversy just another way to ramp up fear and confusion?

There is no good science behind this. In Norway, with its incredibly low death rate, they use one metre. And there is never a reference to whether you are indoors or out. If you breathe out virus indoors, it has little choice but to hang around in the room for a while. If you are outside in fairly still air, which has a speed of about 2 metres per second, the virus you breathed out 2 seconds ago is already 4 metres away. And because the air you breathe out is always warmer than the surrounding air, and warm air rises, that potentially virus-laden air will rise up outside with no ceiling to stop it. So two metres is not necessary in Norway, but it is in England, whether you are in a small room or on a breezy beach. Is this fear-mongering nonsense, or science? It is certainly not the latter.

The influence and mega-bucks of Bill Gates and Big Pharma is supposedly not skewing the debate. Bill Gates’s donations to Prof Lockdown Ferguson’s Imperial College, or to the WHO, make no difference, and Bill Gates’s desire to produce seven billion doses of vaccine does not give him a financial interest. Bill Gates is a nice guy who knows a lot about computer viruses, so we should all look to him as our Saviour from this virus. I fancy there’s more logic in Alice in Wonderland.

12.   The Destruction of Basic Human Rights is a Price Worth Paying.

People being under virtual House Arrest, with Freedom of Movement, Freedom of Association, Freedom of Speech, Freedom to Work, Freedom to attend School, all curtailed, is OK? The introduction of mass personal surveillance is a good thing? If a foreign invader threatened our Rights like that we would fight for them, and accept casualties in the process. Why are we suddenly turning that logic on its head, and deciding to give up Rights to (possibly) save lives? Do we all fondly imagine that we will soon have our Rights back? History shows that Rights are generally hard won, and once lost they are very hard to get back. And if you think you still have Freedom of Speech, try as I and others have, to put across a view that is different to the Government. Yes, you can get it across to a few. But if it reaches many more, Google, or YouTube, or Facebook will soon censor it. If you are reading this article, it is because you are one of a small number, meaning the article is still below the censor’s radar, or the popularity level that triggers censorship.

In those wonderful days before Covid19, we all knew that Politicians, Journalists and Salesmen are inveterate Purveyors of Porky Pies. Now these same people are regarded as Saints and Saviours, with absolutely nothing but our best interests and well-being in their hearts. It is a fact, meaning a real one, not a fake one, that I can think of no topic ever that has had so many utterly bizarre lies told about it. It is also a fact that I cannot think of any matter where politicians around the World all suddenly started braying like donkeys with the same awful hoo-ha. And also a fact that I cannot think of any occurrence which has simultaneously destroyed human rights and wrecked the economy across the entire Globe. Is it not odd that all of those three extreme observations should apply to the very same little virus? If anyone can’t see a problem here, it can only be that Coronapanic has totally obliterated their thought processes.